The orbit of Planet Nine

Five and a half years after our proposal of the existence of Planet Nine, we have finally accomplished what is perhaps the most important task in aiding the search: we now know where to look.  We've had a pretty good general idea for years now, but we couldn't really give a full assessment of the range of uncertainties for where in the sky Planet Nine might be, how massive it might be, and how bright it might be. Now we can. You can read all of the details here.

Figuring all of this out sounds somewhat straight forward. Our task is simply to take the observations of all of the distant Kuiper belt objects (KBOs) whose orbits are affected by Planet Nine and use those to determine everything we possibly can. It only took five years.

You can read the full paper for the details, but the five years consisted of a couple of critical steps:

Sorry it took so long. 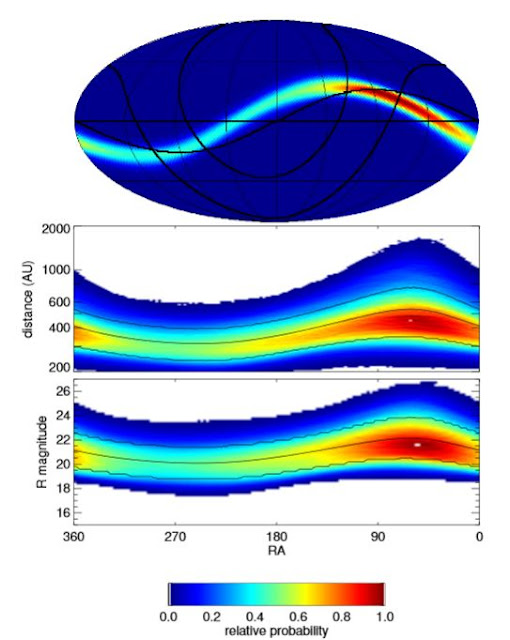 That plot on top if a full-sky view going from 360 to 0 in Right Ascension. The equator, ecliptic, and +/-15 degrees of the galactic plane are shown, if that helps to orient you. The colors show the probability of find P9 at any point in the sky. The highest probability is near aphelion, around ~60 degrees in RA, pretty close to the galactic plane. Not surprisingly, this is where we have been concentrating with our Subaru search. The bottom two panes show the distance and brightness. The median distance at aphelion is around 500 AU. The median brightness is around 22nd magnitude. There is a lot of room for variation however! At its brightest predicted magnitude, P9 could be found in many ongoing all-sky surveys. At its faintest, it will require dedicated searches with large telescopes.

That plot above is truly the point of the whole paper, but there are two more plots of which I am a big fan so I want to share these also.

As mentioned earlier, there had been a lot of discussion of bias and its effect on what we see in the outer solar system. I am here to tell you bias is real. Also I am here to show you that it doesn't cause the clustering that we see. 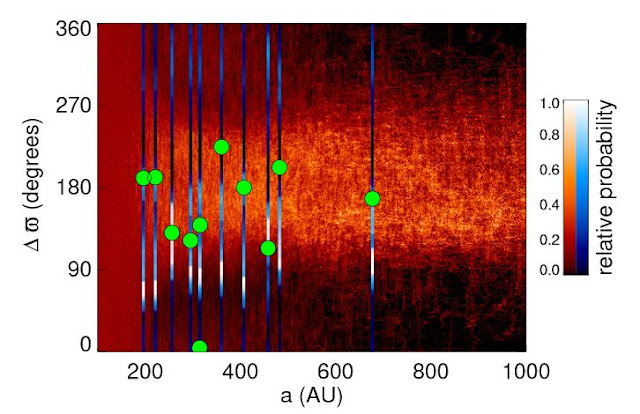 Here is a plot that shows a lot of things all at the same time. First, lets concentrate on the green points. Those are 11 real objects in the sky and they show those objects semimajor axis ("a") versus their longitude of perihelion aka the direction their orbits point in space aka "delta varpi". The fact that 10 of those 11 are aligned is the whole reason we are here.

But wait! There is bias. Maybe those are all lined up like that simply because that's where people have looked? Now look at the blue bars. These show, for each object, the probability of the object having been found at all values of longitude of perihelion if the true longitudes of perihelion were distributed uniformly in space. There are two major regions of bias. One is at longitude of perihelion of ~90, and a weaker one is at ~300. These are caused by the DES and OSSOS surveys which both looked in very specific directions and found many objects. But that's not where the cluster is!

Now look at the red in the background. This shows how the green points should be distributed if Planet Nine were out there messing things up. Looks pretty good, no? 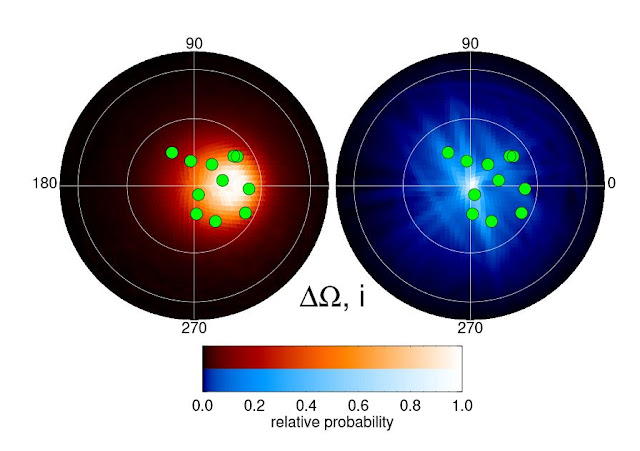 This is the same general idea as above, but now we are plotting the pole position of the orbit of each of the distant objects. A point right in the middle has an orbital plane exactly the same as the planets, a point displaced in any direction from the center is tilted, and the direction of displacement tells the direction of the tilt. As you can see from the green points, the real objects have, on average, about a 15 degree tilt towards zero. Red again shows the Planet Nine prediction. Blue shows the biases. The biases here look weird and spider webby, again mostly because of DES and OSSOS. There is a lot of bias, and the observations generally fal along the lines of bias. But the bias clearly cannot account for the fact that the orbits are tilted and that they are tilted in one direction.

Put these two plots together and you get a 99.6% chance that the objects are clustered, rather than uniform. That sounds pretty good to me.

The paper has even more inside (at 26 pages believe me, there is a lot more), but these are my favorite highlights. I think of that first plot as the Planet Nine Treasure Map. Time to start hunting, my fellow pirates.